﻿ Bill Cosby sentenced to 3 to 10 years, ordered taken into custody

A Pennsylvania judge sentenced Bill Cosby to three to 10 years in state prison after his sexual assault conviction, remanding him to custody.

Bill Cosby was denied bail after being sentenced to up to 10 years in prison for his 2004 assault of Andrea Constand. Constand embraced supporters as she left court. USA TODAY 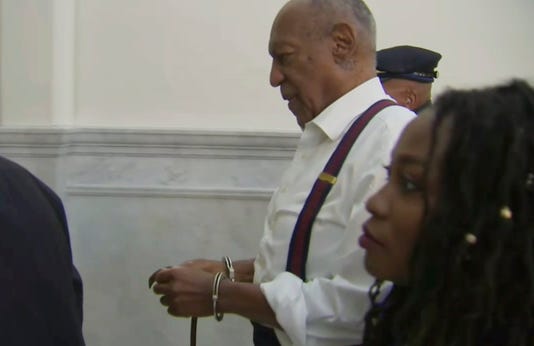 Bill Cosby was led away to prison in handcuffs after being denied bail on the grounds that his sentence is longer than two years.(Photo: AP)

NORRISTOWN, Pa. – A handcuffed Bill Cosby was immediately taken into custody Tuesday after a Montgomery County judge sentenced him to three to 10 years in state prison for the sexual assault of Andrea Constand.

“It is time for justice. Mr. Cosby, this has all circled back to you. The time has come,” Judge Steven O’Neill told the convicted sex offender, denying his request for bail pending appeal and ordering him into immediate custody. He quoted from Constand’s statement to the court, in which she said Cosby took her "beautiful, young spirit and crushed it.”

After the sentencing, Cosby removed his jacket, tie and watch before being taken away in handcuffs, an officer holding his arm. He did not respond to a reporter's request for comment.

Cosby publicist Andrew Wyatt issued a fiery retort outside the courthouse, saying Cosby was denied a fair trial and calling the proceeding "the most racist and sexist trial in the history of the United States." He cast blame on District Attorney Kevin Steele; a "racist and sexist mass media"; and three white female psychologists "who make money off of accusing black men of being sexual predators."

FacebookTwitterGoogle+LinkedIn
Bill Cosby in handcuffs: His sentencing in photos
Fullscreen 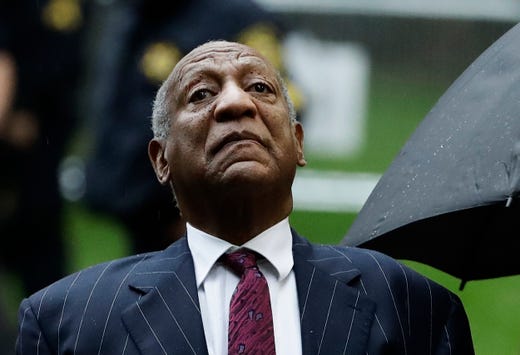 Disgraced TV icon Bill Cosby returned to a Pennsylvania court on Sept. 25, 2018, to face sentencing for sexual assault, five months after his conviction at the first celebrity trial of the #MeToo era. He received a three- to 10-year prison sentence. Matt Slocum/AP
Fullscreen
Cosby is escorted out of the Montgomery County Correctional Facility on Tuesday in Eagleville, Pa., following his sentencing. Jacqueline Larma/AP
Fullscreen
Cosby is taken away in handcuffs after being sentenced Tuesday in Norristown, Pa.,to three to 10 years for felony sexual assault.   Mark Makela/Pool Photo via AP
Fullscreen 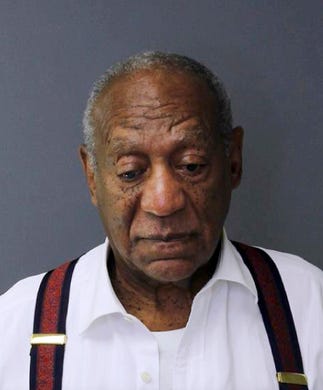 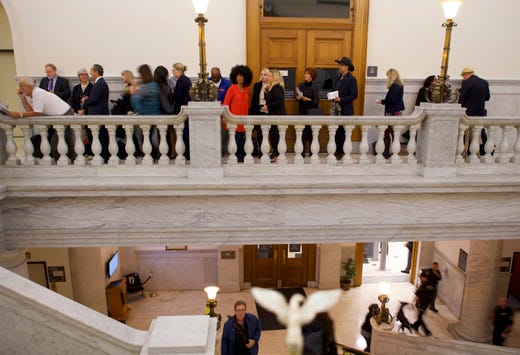 Bill Cosby accuser Lili Bernard (center left) and others queue inside the Montgomery County Courthouse before Cosby's arrival on the second day of his sentencing hearing. Mark Makela/Pool Photo via AP
Fullscreen 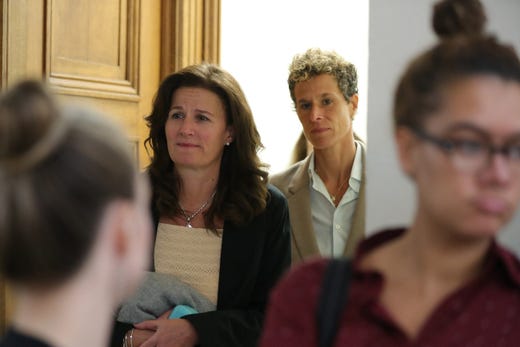 Cosby accuser Andrea Constand (right) leaves the courtroom on Monday, during a lunch break on the first day of the Cosby sentencing hearing at the Montgomery County Courthouse. DAVID MAIALETTI/AFP/Getty Images
Fullscreen
Activist Bird Milliken demonstrates outside the Montgomery County Courthouse with an effigy of Cosby in a shopping cart on the first day of sentencing in the star's sexual assault trial. Mark Makela/Getty Images
Fullscreen 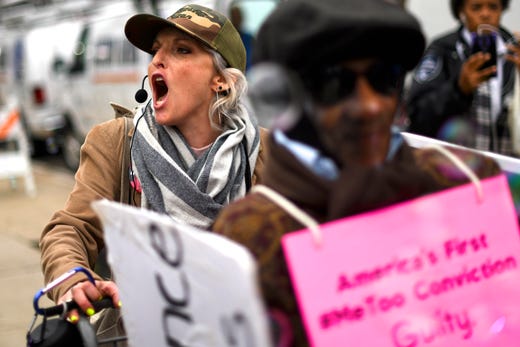 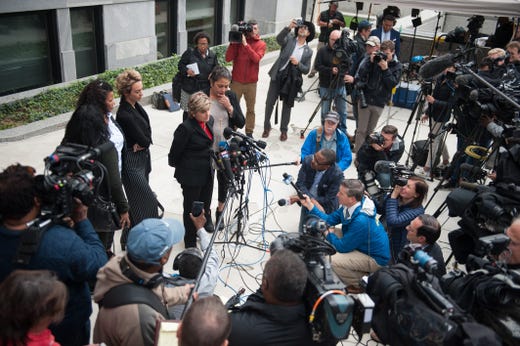 Attorney Gloria Allred speaks outside the Montgomery County Courthouse during a break in the first day of sentencing for Cosby, who was found guilty on three counts of sexual assault against Andrea Constand in 2004.   TRACIE VAN AUKEN/EPA-EFE
Fullscreen

Accuser Lili Bernard, who has said she was drugged and raped by Cosby in the 1990s, converses with a man outside the courthouse on Monday.  Jacqueline Larma/AP
Fullscreen 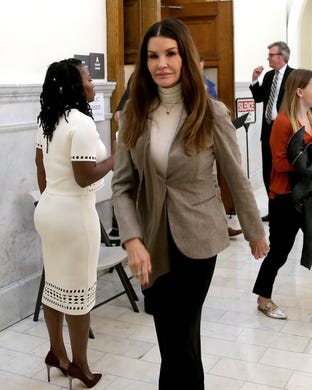 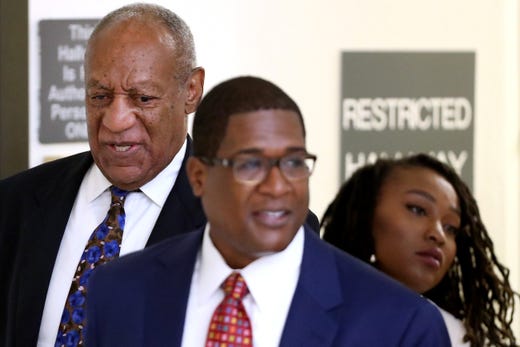 Bill Cosby (left) returns to the courtroom on Monday after a break with his representatives Andrew Wyatt and Ebonee Benson at the Montgomery County Courthouse.   Pool, David Maialetti-Pool/Getty Images
Fullscreen 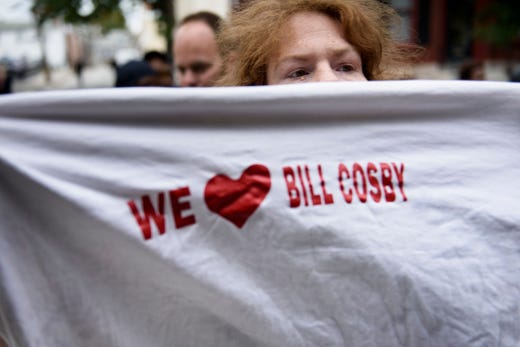 A supporter holds up a shirt after the first day of the comedian's sentencing hearing. BRENDAN SMIALOWSKI/AFP/Getty Images
Fullscreen 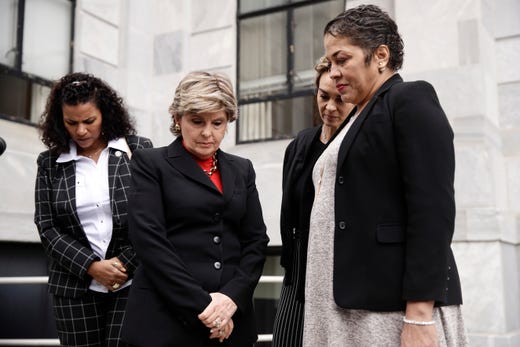 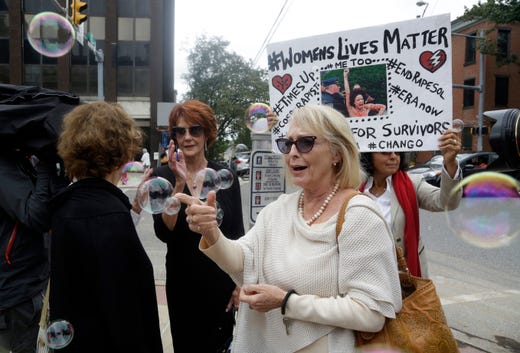 Accuser Victoria Valentino (center), a former Playboy playmate who accused Cosby of slipping her pills and raping her in the late 1960s, appears with a protester near the Montgomery County Courthouse on Monday. Jacqueline Larma/AP
Fullscreen
Cosby's lawyer Philip C. Green departs the Montgomery County Courthouse on the first day of sentencing. Sixty women have accused the 80-year-old entertainer of sexual assault. Mark Makela/Getty Images
Fullscreen

Replay
Share your feedback to help improve our site experience!