Fox, National Geographic and the producers of the show ‘Cosmos’ have announced an investigation into allegations of sexual misconduct against their host, famed astrophysicist Neil deGrasse Tyson. Susana Victoria Perez has more. 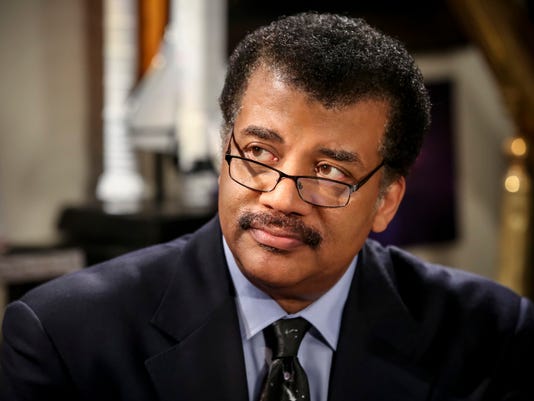 Fox and the National Geographic channel say they will look into sexual misconduct allegations made against 'Cosmos' host Neil deGrasse Tyson.(Photo: CBS)

"Cosmos" host and famed astrophysicist Neil deGrasse Tyson denied sexual misconduct allegations Saturday in a long Facebook post in which he welcomed an investigation announced by Fox and National Geographic, which present the science- and space-oriented series.

Fox, NatGeo and the producers of "Cosmos" said Friday that they will review accusations of sexual misconduct made against Tyson, who also heads the Hayden Planetarium in New York.

Tyson hosted "Cosmos" in 2014 and a second edition, "Cosmos: Possible Worlds," is scheduled to premiere March 3 and will run on Fox and the National Geographic channel.

On Friday, Fox and National Geographic issued a joint statement that says: “We have only just become aware of the recent allegations regarding Neil deGrasse Tyson. We take these matters very seriously and we are reviewing the recent reports.”

The producers of "Cosmos" also put out a statement: “The credo at the heart of 'Cosmos' is to follow the evidence wherever it leads. The producers of 'Cosmos' can do no less in this situation. We are committed to a thorough investigation of this matter and to act accordingly as soon as it is concluded.”

In his Facebook essay, titled "On Being Accused," Tyson says men accused of sexual impropriety in the #MeToo era are presumed guilty by the public for a variety of reasons, "most justified, some unjustified." He says evidence matters, but in cases where it's one person's word against another, "people tend to pass judgment on who is more credible." He then welcomes the upcoming investigation and offers a response to each allegation.

Two women, identified as working with Tyson or in his scientific field, accused him of inappropriate sexual behavior in a story posted Thursday on Patheos.com, which describes itself as the "premier online destination to engage in the global dialogue about religion and spirituality."

One of the women, Katelyn N. Allers, a professor of physics and astronomy at Bucknell University, told Patheos she was "felt up" by Tyson at a 2009 astronomy event. Another woman, Ashley Tyson, who had worked as an assistant to Tyson, said she quit her job because of Tyson's inappropriate sexual advances, the Patheos story says.

Another Patheos story features an interview with Tchiya Amet, who claims Tyson drugged and raped her while they were graduate students in the 1980s. According to the story, Amet accused Tyson publicly in 2010 and wrote blog posts about it in 2014, 2016 and 2017.

In the Patheos story, Amet says she was at Tyson's apartment "when he offered her water, and the next thing she remembered was waking up to an assault."

The story quotes her: “I woke up in his bed; I was naked … When he saw that I had woken up, he got on top of me and mounted me, and I passed out again.” It says she confronted him later at school and "reportedly asked him 'how this happened and why it happened,' and he responded in part, that it was because they are 'in this together.'"

In each instance, Tyson offers a detailed response. He denies any impropriety regarding the 2009 event, saying "I only just learned … that she thought this behavior creepy. That was never my intent and I’m deeply sorry to have made her feel that way."

Regarding the 2014 incident, Tyson said he invited Watson to his place for wine and cheese during their last week of production on a project as "a capstone on our friendship." He said she told him soon after that she was "creeped out" by the incident. He said their only physical contact was a special handshake, one he uses to show appreciation to new friends, that he had learned from a Native American elder. It involves extending the thumb "to feel the other person's vital spirit energy — the pulse."

Tyson said he apologized profusely during the meeting in his office and that Watson accepted it. She said it would be her last day working on the production.

"I note that her final gesture to me was the offer of a hug, which I accepted as a parting friend," Tyson writes.

Regarding the 1980s drugging and rape allegation, he acknowledges a brief relationship with the woman, but denies her accusation.

"According to her blog posts, the drug and rape allegation comes from an assumption of what happened to her during a night that she cannot remember. It is as though a false memory had been implanted, which, because it never actually happened, had to be remembered as an evening she doesn’t remember," he writes.

Tyson concludes his essay by welcoming the investigation.