﻿ Dow: Stocks close down even after Federal Reserve keep rates near zero

U.S. stocks fall after the Federal Reserve said it expects to keep interest rates low through 2022 and remains cautious on the economy.

U.S. Federal Reserve Chair Jerome Powell warned Wednesday of the threat of a prolonged recession resulting from the viral outbreak and urged Congress and the White House to act further to prevent long-lasting economic damage. (May 13) AP Domestic

Stocks closed a choppy day on Wall Street with broad losses Wednesday, despite fresh assurances from the Federal Reserve that it would keep interest rates low through 2022 and would continue buying bonds to help markets function smoothly.

The S&P 500 fell 0.5%, extending losses from a day earlier. The benchmark index had briefly climbed 0.5% following the release of the central bank’s latest policy statement.

Most sectors finished lower, but a surge in technology sector stocks helped push the Nasdaq above 10,000 for the first time, giving the index its third record high close in a row. Bond yields were broadly lower, reflecting caution among investors.

The Fed has cut its benchmark short-term rate to near zero as part of a historic effort to gird the stock market and U.S. economy from the coronavirus pandemic’s economic ravages. 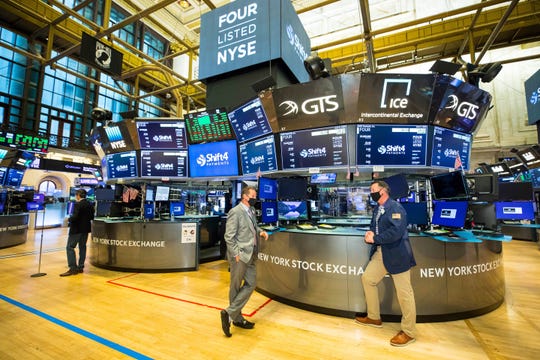 Will your local Starbucks close?: Coffee giant says it will close 400 stores but expanding pickup options

The central bank made clear Wednesday that it will keep providing support by buying bonds to maintain low borrowing rates. It also forecast no rate hike through 2022, which could make it easier for consumers and businesses to borrow and spend enough to sustain an economy depressed by business shutdowns and high unemployment.

The move to leave its key interest rate unchanged wasn’t a surprise to investors, but the fact that nearly all of the members of the central bank’s Federal Open Market Committee foresee no rate hike through 2022 was noteworthy, said Brian Nick, chief investment strategist at Nuveen.

“What you have on the FOMC is unanimity that rates ought to stay low and that their communication should continue to emphasize that they’re not going to raise interest rates, absent a material improvement in the economy,” he said.

The combination of low interest rates and low inflation has been a key driver for gains in big technology companies that can grow almost regardless of the economy.

“That’s been the magic formula for growth stocks,” Nick said.

Wall Street has been generally rising since late March, at first on relief following emergency rescues by the Fed and Congress. More recently, investors have begun piling into companies that would benefit most from a reopening economy that’s growing again. The S&P 500, a benchmark for many index funds, is now within 6% of reclaiming the all-time high it reached in February.

Still, uncertainty remains over how quickly economies can recover from the pandemic, given that the numbers of infections and fatalities are still rising in many countries.

“What matters to the market is making sure the coronavirus doesn’t come back in any material way and making sure the Fed is continuing to support economic activity,” said Mike Zigmont, head of trading and research at Harvest Volatility Management.

A report on Friday showing that the U.S. job market surprisingly strengthened last month helped stoke optimism among investors that the economy can climb out of its current hole faster than forecast. Employers added 2.5 million workers to their payrolls, when economists were expecting them instead to slash another 8 million jobs.

But in remarks during a virtual news conference Wednesday, Fed Chair Jerome Powell said the May jobs data, while encouraging, was hardly enough to ensure that the job market or the economy is back on track.

“The labor market may have hit bottom in May,” Powell said. But, he added, “we’re not going to overreact to a single data point.”

Airlines were among the big decliners Wednesday after Delta Air Lines warned in a regulatory filing that it expects its revenue in the second quarter to be down 90% from a year earlier. Delta fell 7.4%, American Airlines dropped 8.2% and Alaska Air Group lost 10%.

Two of the nation’s biggest mall owners fell sharply after Simon Property Group backed out of its $3.6 billion takeover of rival Taubman Centers. The buyout deal was signed in February, just before the pandemic began to spread in the U.S. Simon Property slid 4%, while Taubman plunged 20.1%.

Shares in electric car and solar panel maker Tesla closed above $1,000 for the first time, climbing 9% to $1,025.05. The stock also closed at a new high on Monday. Tesla shares have more than doubled so far this year.

Bond yields fell. The yield on the 10-year Treasury yield slid to 0.72% from 0.82% late Tuesday. It tends to move with investors’ expectations of the economy and inflation, though it’s still well above the 0.64% level where it started last week.

The pullback in global stocks came as the Organization for Economic Cooperation and Development said the coronavirus crisis has triggered the worst global recession in nearly a century and projected that the global economy will shrink by 6% this year in a best-case scenario, with only a modest pick-up next year.

The estimate, which is based on an analysis of the latest global economic data, suggests an even sharper decline of 7.6% if there is a second wave of coronavirus contagions this year.