﻿ Arizonans wait over a week for Covid-19 tests, when they're available

Waits for results now up to a week for many; testing supply issues resurface as more people seek tests in state.

Time slots for COVID-19 testing appointments in the Phoenix area have quickly been snapped up, faster than in-demand concert tickets.

Some Arizonans have reported waiting in line for hours on end for tests, battling the punishing summer heat.

As of Monday, Arizona had 54,586 known cases and 1,342 known deaths. Cases have increased by 171% over the past three weeks. More than 1,000 new cases have been reported on each of the past 13 days, with more than 2,000 new cases reported on each of the past five days, according to state data. The percentage of positive test results has spiked since mid-May.

More cases means more people have been exposed to the virus. Those exposed may seek testing, either with or without symptoms.

As a public service, The Arizona Republic is offering coronavirus coverage relating to public safety free of charge. Subscribe now to azcentral.com.

Some of the supply-chain issues that were acute earlier in the pandemic continue, like a lack of nasal swabs and reagents needed to conduct tests.

Sonora Quest Laboratories, which is processing a majority of Arizona's COVID-19 tests, said its turnaround time for results has increased and now takes an average of 6-7 days, said Jessica Pridonoff, a spokeswoman for the company.

At other points, the turnaround time has been less than two days.

There has been a "material increase in demand which puts stress on all laboratories," she said via email.

Sonora Quest is working on several ways to meet the demand, like finding alternative materials and supply streams, purchasing additional testing machines and adding staff who are dedicated only to COVID-19 testing, Pridonoff said.

GETTING TESTED: Here's the latest on COVID-19 testing options in Arizona

That site has about 1,000 appointments per day, said Becky Armendariz, a Banner spokeswoman. People with symptoms and those concerned about exposure can be tested there, she said.

"Due to high demand at this time, all of our appointment slots are filled each day," Armendariz said via email. "Those who wish to get tested at that site would need to call early to schedule their appointments."

She also said turnaround times to get results is "longer than anticipated."

Last week, the governor's office and the Arizona Department of Health Services asked health care providers what support they needed, Armendariz said. At that time, Banner requested the state help Sonora Quest get supplies so they can increase their capacity to process COVID-19 tests, she said.

"Once this occurs, Banner will be able to increase the number of appointments available at the Fairgrounds," she said.

Another large hospital system, Dignity Health, is currently seeing a shortage of testing reagents, according to spokeswoman Carmelle Malkovich.

Dignity Health hospitals are able to process test results in around 24 hours for COVID-19 emergency department patients and hospital inpatients and in two days for elective surgery patients.

"The majority of our testing analysis is now being done in one of our in-house labs, which has helped provide efficient turnaround times," Malkovich said in an email.

Are you a health care worker or a COVID-19 patient? Help us learn more about coronavirus impact in Arizona by telling us your story.

The number of tests has increased in recent weeks, but even more so, the spread of COVID-19 has increased, leaving providers struggling to meet the testing demands of all the sick or exposed people.

Between early March and mid-May, a little more than 140,000 total tests were completed in Arizona.

As of Monday, a total of 429,418 diagnostic tests had been completed. Testing has increased by around 200% since the stay-at-真人百家家乐官网网站home order expired in mid-May.

During that same period, total cases increased by 315%, meaning the virus has been spreading at a rate significantly higher than what would be accounted for just by increased testing.

And in the last two weeks, tests increased by around 50% and cases by around 100%.

The percent of positive tests has also increased significantly over the past month, which is seen as an indicator that testing is not as robust as it should be, and community spread of the virus is increasing. Positive tests reached 19 percent last week compared to 6 percent in mid-May.

The rapid growth in case numbers suggests increased community spread — meaning an increase in people sick or exposed who need to get tested.

That number — the demand for tests — has in some cases exceeded Arizona’s test supply.

Will Humble, the executive director of the Arizona Public Health Association, said there have been testing issues throughout the entire pandemic, depending on where you lived and your access to the health care system. It has never been as ubiquitous as it seemed, he said.

“My sense is that, there's so many people in the community that are sick right now that want to get tested that it’s just overwhelming what supply does exist,” he said.

Patrick Ptak, a spokesman for Ducey, said private labs have seen increased demand for processing tests because cases are increasing and contact tracing is expanding.

The Arizona Department of Health Services is “actively working” to provide private labs with added resources so they can expand testing, he said. It’s not clear what supplies are in shortage that the state is helping with; Ptak did not answer a follow-up question.

He said people should preregister for testing on the azdhs.gov/covid19testing to reduce wait times.

Arizonans struggle to get tested

This past weekend in Maryvale, in west Phoenix, almost 1,000 people waited up to 13 hours for a free diagnostic test. The testing event was intended to run from 5:30 a.m. to 11 a.m, but by 6 p.m., there were still several people in cars waiting in line to be tested, some of whom had arrived early in the morning. Others gave up and went 真人百家家乐官网网站home, unable to get tested.

Others have faced difficulties in finding a good place to get tested to begin with.

In early June, Alexandra Sivak spent several hours online and on the phone from her Los Angeles 真人百家家乐官网网站home trying to find a test appointment in the East Valley for her sister, who was 真人百家家乐官网网站home with a newborn and had COVID-like symptoms.

They ideally wanted a face-to-face consultation along with a test, rather than a drive-thru test, but that quickly became near impossible.

Sivak called several urgent care centers in Mesa and Gilbert, but all were out of test supplies.

“I received almost the exact same response from all of them, which was, ‘Yes we’re doing testing, yes we have the tests, but we don’t have swabs. There’s a backorder on swabs to actually perform the tests, so we’re unable to do them at this time.’”

After several of the same responses, Sivak and her sister fell back on the drive-thru option, booking an appointment for the next day at a CVS. It wasn’t the more comprehensive care they’d wanted, but it seemed like the only available option.

FacebookTwitterGoogle+LinkedIn
This is what the testing blitz at State Farm Stadium in Glendale looked ...
Fullscreen 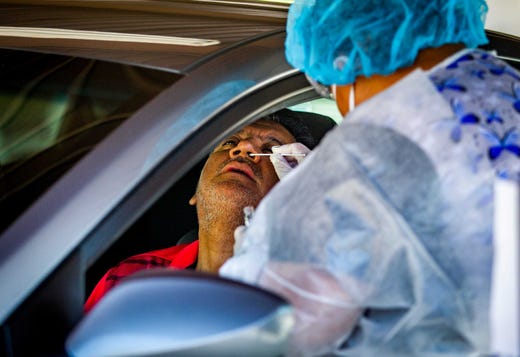 Derick Asturias gets tested for the novel coronavirus during the testing blitz on Saturday, May 2 at Valle del Sol, a testing site in Phoenix. Eli Imadali/The Republic
Fullscreen 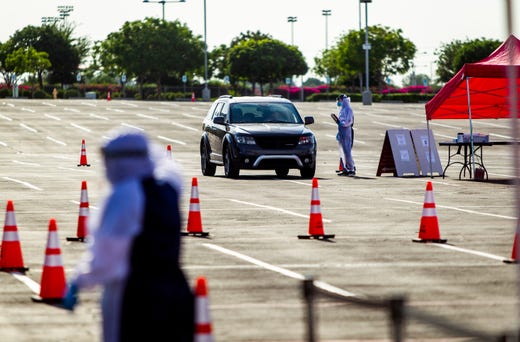 A Dignity Health medical worker speaks to a patient at a drive-up coronavirus testing site at State Farm Stadium from Dignity Health and the Arizona Cardinals in Glendale on Saturday, May 9, 2020. Eli Imadali/The Republic
Fullscreen 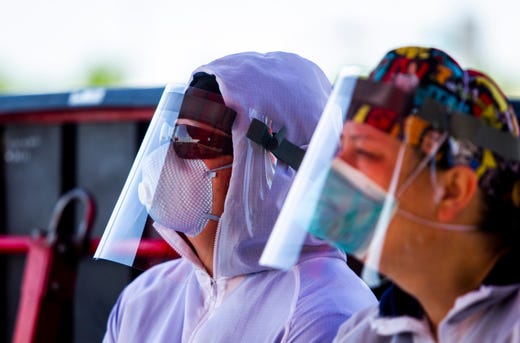 Dignity Health medical workers Stephanie Tyrin and Shannon Miller relax in between patients at a drive-up coronavirus testing site at State Farm Stadium from Dignity Health and the Arizona Cardinals in Glendale on Saturday, May 9, 2020. Eli Imadali/The Republic
Fullscreen

Sarah Lawrence gets tested for COVID-19 by a Dignity Health medical worker at a drive-up testing site at State Farm Stadium from Dignity Health and the Arizona Cardinals in Glendale on Saturday, May 9, 2020. Eli Imadali/The Republic
Fullscreen 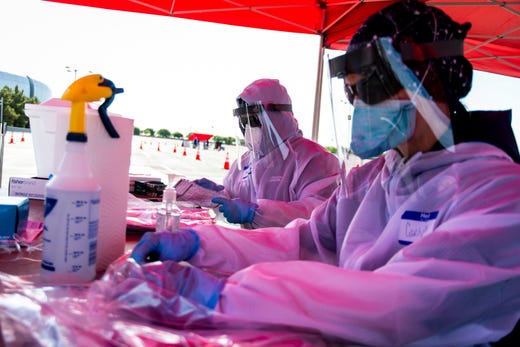 Dignity Health medical worker Carly Worthington tapes the bottom of her contamination suit pants at a drive-up coronavirus testing site at State Farm Stadium from Dignity Health and the Arizona Cardinals in Glendale on Saturday, May 9, 2020. Eli Imadali/The Republic
Fullscreen 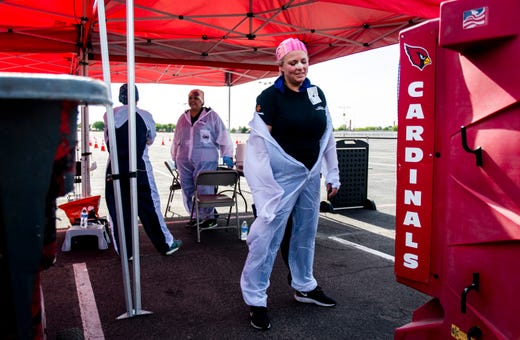 Dignity Health medical worker Emily Davis cools off in front of a large fan at a drive-up coronavirus testing site at State Farm Stadium from Dignity Health and the Arizona Cardinals in Glendale on Saturday, May 9, 2020. Eli Imadali/The Republic
Fullscreen 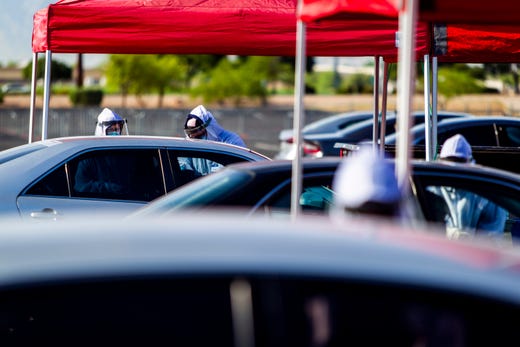 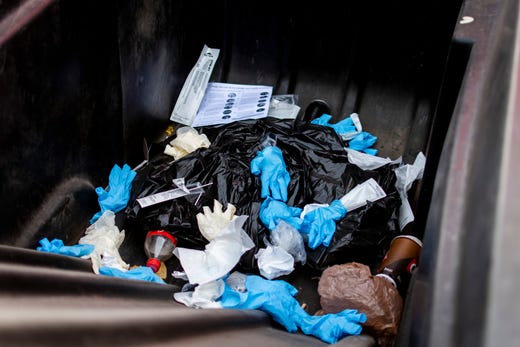 Potentially contaminated gloves and other supplies sit in a dumpster at a drive-up coronavirus testing site at State Farm Stadium from Dignity Health and the Arizona Cardinals in Glendale on Saturday, May 9, 2020. Eli Imadali/The Republic
Fullscreen 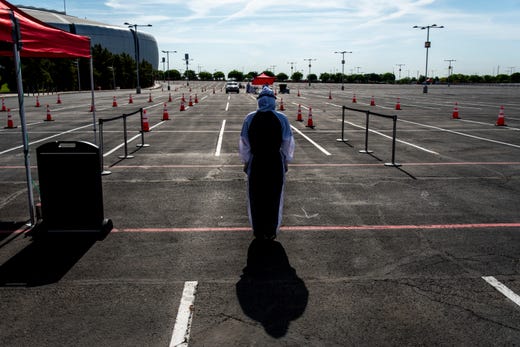 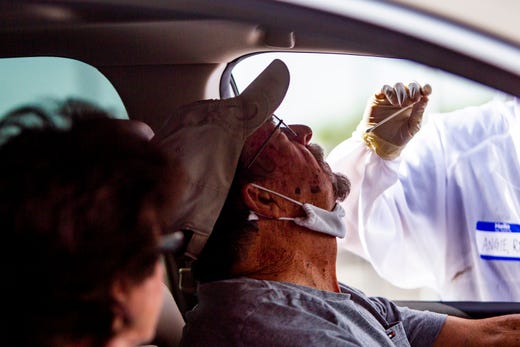 Theodore Lawrence gets tested for coronavirus by a Dignity Health medical worker at a drive-up testing site at State Farm Stadium from Dignity Health and the Arizona Cardinals in Glendale on Saturday, May 9, 2020. Eli Imadali/The Republic
Fullscreen 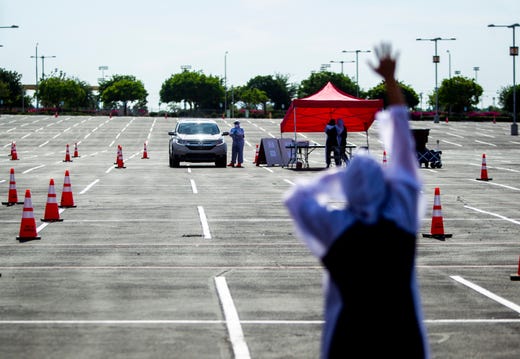 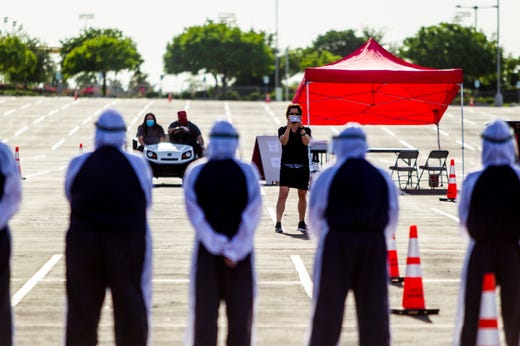 Dignity Health medical workers pose for a picture together at a drive-up coronavirus testing site at State Farm Stadium from Dignity Health and the Arizona Cardinals in Glendale on Saturday, May 9, 2020. Eli Imadali/The Republic
Twitter and Facebook.