The bill requiring voters to present photo identification in order to vote now heads to Gov. Beshear's desk for his signature or veto.

An amended bill requiring voters to present photo identification to vote is heading to the governor's desk for his signature or veto.

Kentucky voters are currently required to present identification to vote unless they are recognized by a poll worker, but Senate Bill 2, passed by both chambers of the legislature, would require government-issued identification with the voter's photograph.

The bill's Republican backers say the measure is needed to prevent in-person voter fraud and ensure public confidence in elections, though Democratic opponents countered it would create an unnecessary barrier to voting, noting there have been zero confirmed incidents of voter impersonation in Kentucky.

Both chambers passed different versions of the bill earlier in the session by a nearly party-line vote, with a conference committee creating a new version of the bill Thursday before the House and Senate passed it that evening.

A copy of the amended bill passed by both chambers had not been publicly posted by Thursday evening.

If Gov. Andy Beshear signs the bill into law, voters would be required to have a photo ID by this November's general election.

Looking back: Amended Kentucky bill to require photo voter ID would go into effect this year 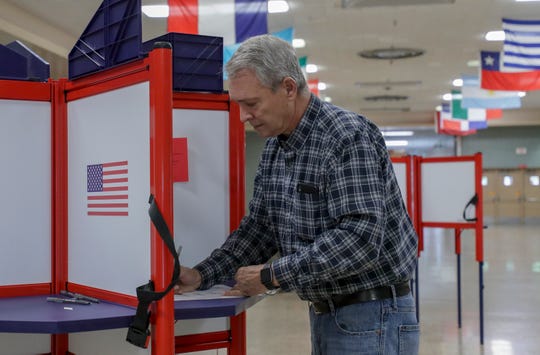 Ralph Merkel fills out his ballot at Atherton High School on Tuesday morning. May 21, 2019 (Photo: By Michael Clevenger/Courier Journal)

Beshear previously said he would not support any bill that makes it more difficult for Kentuckians to vote but was waiting to see what version of the bill passed. Even if he vetoes the bill, it likely would be overridden by the Republican-dominated General Assembly.

Noting that Kentucky's primary election already has been pushed back to June over concerns about the coronavirus, the ACLU of Kentucky issued a statement condemning the passage of SB 2 as further endangering the same populations most vulnerable to the pandemic.

"Thousands of people who do not meet the newly mandated identification requirements will have to choose between exposing themselves to COVID-19 to obtain identification, or being forced to sit on the sidelines on Election Day," stated Corey Shapiro, the legal director for ACLU-KY.