﻿ Mark Milley: It was a 'mistake' to go with Trump to St. John's Church

'I should not have been there': Joint Chiefs Chair Mark Milley says it was a 'mistake' to walk with Trump to church

"As a commissioned uniformed officer, it was a mistake that I have learned from, and I sincerely hope we all can learn from it," Gen. Milley said.

'I should not have been there': Joint Chiefs Chair Mark Milley says it was a 'mistake' to walk with Trump to church

General Mark Milley said it was a mistake to accompany President Trump on his walk to St. John's Church. USA TODAY

Chairman of the Joint Chiefs of Staff Mark Milley said Thursday it was a "mistake" to accompany President Donald Trump and other top administration officials on a walk to historic St. John's Church after peaceful protesters were forcibly cleared from the area.

"My presence in that moment and in that environment created a perception of the military involved in domestic politics," the Army general said in remarks for a National Defense University commencement ceremony. "As a commissioned uniformed officer, it was a mistake that I have learned from, and I sincerely hope we all can learn from it."

Protests erupted in cities across the USA and have continued since George Floyd, an African American man, was killed May 25 when a white Minneapolis police officer knelt on his neck for nearly nine minutes.

Milley’s remarks mark a dramatic breach between the Pentagon and the White House on the military’s role in responding to the protests that followed Floyd’s death. The photograph of Milley, in his camouflage combat uniform, and Defense Secretary Mark Esper walking along a path cleared of protesters by police and National Guard forces sparked outrage among retired military officials.

Attorney General William Barr said his decision to have security forces clear the area around the White House of demonstrators June 1was out of safety concerns and unrelated to the president's walk to the church, which had been damaged by protesters the night before.

Milley advised the graduates that, as senior leaders, everything they do will be closely watched and said, "I am not immune." He said the photograph of him in Lafayette Square "sparked a national debate about the role of the military in civil society."

"I should not have been there," he said.

"We who wear the cloth of our nation come from the people of our nation," he said. "And we must hold dear the principle of an apolitical military that is so deeply rooted in the very essence of our republic."

Milley’s remarks echo others who warned of a political and constitutional crisis by drawing the armed forces into domestic politics.

The walk to the church was condemned by many, including former Defense Secretary James Mattis, whostatement published in The Atlantic. "At 真人百家家乐官网网站home, we should use our military only when requested to do so, on very rare occasions, by state governors. Militarizing our response, as we witnessed in Washington, D.C., sets up a conflict – a false conflict – between the military and civilian society."

Trump sought deeper involvement of the Pentagon in responding to the protests by calling for the use of active-duty forces, which are generally prohibited from domestic law enforcement duties. Units from the 82nd Airborne were dispatched to the outskirts of Washington and were close to be called on, according to Army Secretary Ryan McCarthy.

Trump said Milley would be in charge of the response to protests. Milley’s remarks Thursday are almost certain to strain his relationship with Trump.

I have nothing but deep admiration for and total confidence in General Milley as Chairman of the Joint Chiefs of Staff.

I support his statement in both substance and spirit regarding the recent presidential visit to St. Johns. https://t.co/dLAumOeq8s

In his remarks Thursday, Milley addressed concerns about racial discrimination at the heart of the protests and said the military needs to do more to be inclusive.

"Our responsibility as military leaders is to ensure that each and every one of our service members is treated fairly, with dignity and respect," he said.

"We must, we can, we will do better," Milley said in calling for a reassessment of how the military recruits and promotes its members. "We must ensure that diverse candidates have equal opportunity to branch into the career fields and serve the key positions most likely to produce our future senior leaders." 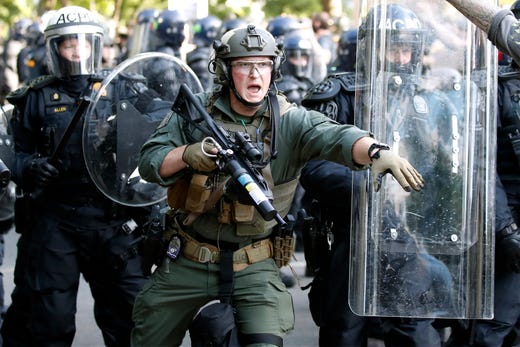 Police begin to clear demonstrators gathered as they protest the death of George Floyd, Monday, June 1, 2020, near the White House in Washington Alex Brandon, AP
Fullscreen 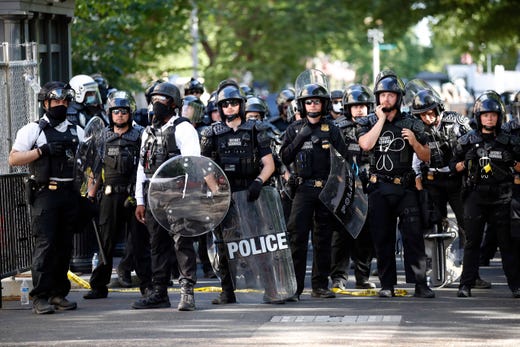 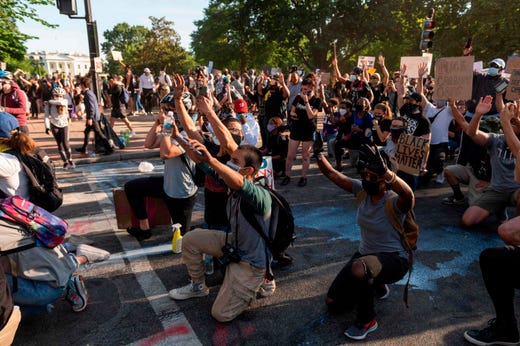 Protestors take a knee and raise their hands as they face riot police near the White House on June 1, 2020 as demonstrations against George Floyd's death continue. ROBERTO SCHMIDT, AFP via Getty Images
Fullscreen

Protestors are tear gassed as the police disperse them near the White House on June 1, 2020 as demonstrations against George Floyd's death continue. ROBERTO SCHMIDT, AFP via Getty Images
Fullscreen 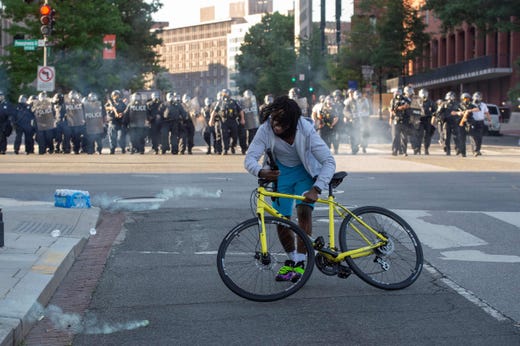 A protestor grabs his bike as the police uses tear gas and rubber bullets to disperse the crowd gathered near the White House on June 1, 2020 as demonstrations against George Floyd's death continue. ROBERTO SCHMIDT, AFP via Getty Images
Fullscreen

President Donald Trump makes a statement in the Rose Garden about the ongoing unrest across the nation on June 1, 2020 in Washington, DC. Chip Somodevilla, Getty Images
Fullscreen 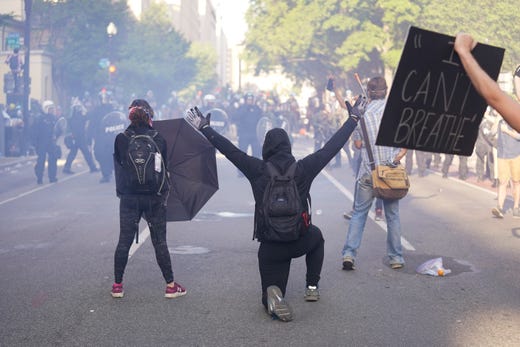 Demonstrators kneel in front of a line of police officers during a protest for the death of George Floyd, Monday, June 1, 2020, near the White House in Washington. Evan Vucci, AP
Fullscreen 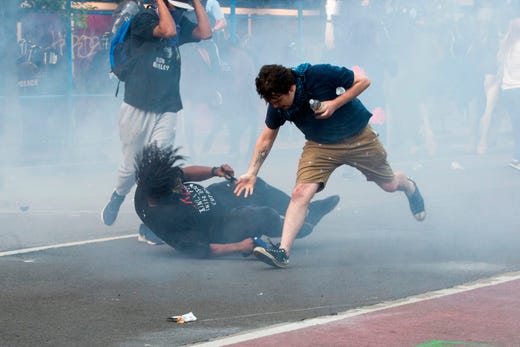 Protestors are tear gassed as the police disperse them near the White House on June 1, 2020 as demonstrations against George Floyd's death continue. ROBERTO SCHMIDT, AFP via Getty Images
Fullscreen 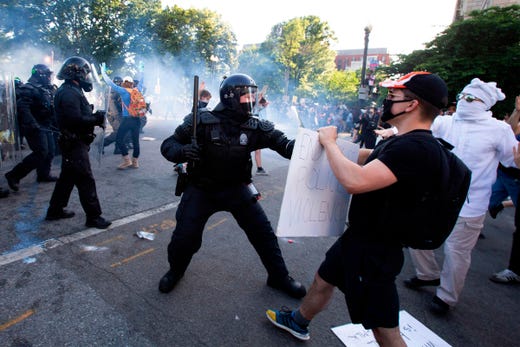 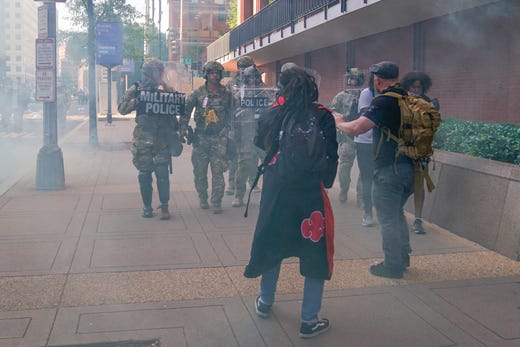 Military police begin to clear the sidewalks near the White House in Washington of demonstrators who had gather to protest the death of George Floyd, June 1, 2020. Evan Vucci, AP
Fullscreen 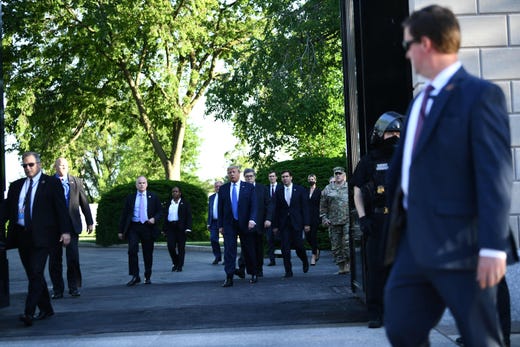 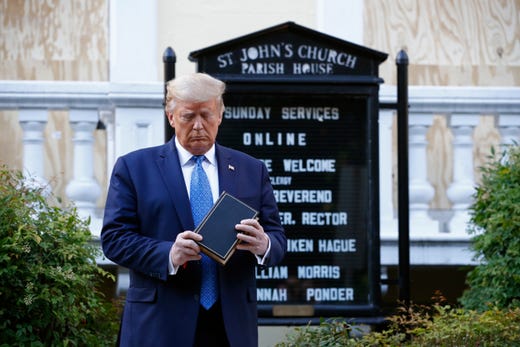 President Donald Trump holds a Bible as he visits outside St. John's Church across Lafayette Park from the White House Monday, June 1, 2020, in Washington. Part of the church was set on fire during protests on Sunday night. Patrick Semansky, AP
Fullscreen 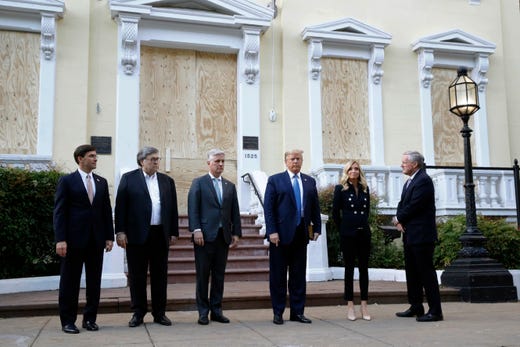 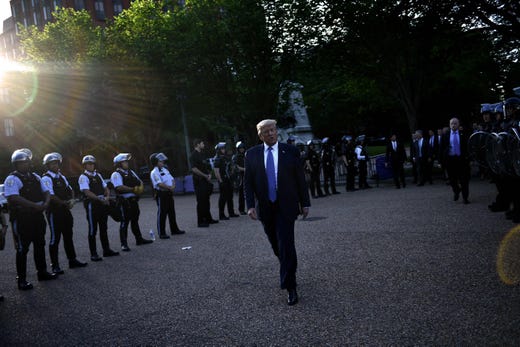 President Donald Trump walks back to the White House escorted by the Secret Service after appearing outside of St John's Episcopal church across Lafayette Park in Washington, DC on June 1, 2020. BRENDAN SMIALOWSKI, AFP via Getty Images
Fullscreen