Earlier this year, the Justice Department found it had “insufficient” cause to wiretap Page during its probe into Russian election interference.

President Trump acknowledged for the first time that he would leave the White House when the Electoral College casts its formal vote for Joe Biden. Associated Press

Former Trump campaign associate Carter Page filed a $75 million federal lawsuit against the Department of Justice and the FBI in Washinton on Friday.

The lawsuit seeks relief for "multiple violations" of Page’s "Constitutional and other legal rights in connection with unlawful surveillance and investigation of him by the United States Government."

Page claims to have been targeted by the FBI because of his work with President Donald Trump’s 2016 campaign.

The complaints made in the lawsuit refers to four warrant applications by the FBI to electronically survey Page, which the document calls “false and misleading.”

Earlier this year, the Justice Department recognized that it had “insufficient” cause to continue their wiretaps of Page, which was a part of their investigation of Russian interference in the 2016 election. The department also found that at least two of the four warrants used to survey Page lacked "probable cause" to support the allegation that Page was working as a Russian agent.

Last year, a report released by Michael Horowitz, the Justice Department inspector general, found inaccuracies in multiple surveillance applications, exaggerating the justification for monitoring Page. Despite the identified inaccuracies, Horowitz determined that the FBI was justified in launching its investigation into the Kremlin's interference effort.

'Certinaly I will': Trump says he would be part of a peaceful transfer of power

Page also accuses the FBI of extensively relying on information and documents from Christopher Steele, a former British spy.

The lawsuit states that the FBI relied on Steele while knowing he "had been paid by the Democratic Party and/or the Hillary Clinton presidential campaign to perform 'political opposition research' and dig up dirt on a connection between the Trump campaign and Russia in order to divert attention from the investigation of Clinton’s email practices while she was Secretary of State."

And Page’s complaint accuses the FBI of denying his relationship with the CIA in order to get the warrants.

Page was an "operational contact" between 2008 and 2013, assisting the CIA in “combatting intelligence-related activities pursued by Russia and other foreign countries against the United States’ interest," according to the lawsuit.

Comey is sworn in during the Senate Intelligence Committee hearing on Capitol Hill on June 8, 2017. Andrew Harnik, AP
Fullscreen

Comey walks at his 真人百家家乐官网网站home in McLean, Va., on May 10, 2017, a day after being fired by President Trump. Sait Serkan Gurbuz, AP
Fullscreen

Comey is sworn in on Capitol Hill on July 7, 2016, prior to testifying before the House Oversight and Government Reform Committee hearing to explain his agency's recommendation to not prosecute Hillary Clinton over her private email setup. J. Scott Applewhite, AP
Fullscreen 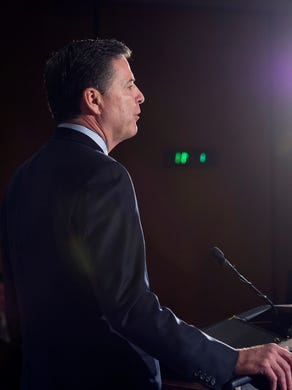 Comey makes a statement at FBI headquarters in Washington on July 5, 2016, to announce that the agency would not recommend criminal charges in its investigation into Hillary Clinton's use of a private email server while serving as secretary of State. Cliff Owen, AP
Fullscreen

Comey listens to President Obama speak to members of the media in the Oval Office on June 13, 2016. Pablo Martinez Monsivais, AP
Fullscreen

Comey speaks about the FBI's request to Apple to unlock the iPhone of the San Bernardino shooter during a hearing before the House Intelligence Committee on Feb. 25, 2016. Jim Lo Scalzo, European Pressphoto Agency
Fullscreen

Comey prepares to testify on Capitol Hill on Dec. 9, 2015, before the Senate Judiciary Committee hearing on oversight of the FBI. Susan Walsh, AP
Fullscreen

Comey speaks alongside Health and Human Services Secretary Sylvia Mathews Burwell about a national effort to crack down on Medicare fraud during a press conference at the Department of Justice on June 18, 2015, in Washington. T.J. Kirkpatrick, Getty Images
Fullscreen

Comey speaks about the impact of technology on law enforcement on Oct. 16, 2014, at Brookings Institution in Washington. Jose Luis Magana, AP
Fullscreen

Comey speaks during a news conference on child sex trafficking at the FBI headquarters in Washington on June 23, 2014. Mark Wilson, Getty Images
Fullscreen

Comey talks with outgoing FBI Director Robert Mueller before being officially sworn in at the Justice Department in Washington on Sept. 4, 2013. Susan Walsh, AP
Fullscreen

President Obama speaks during a news conference to announce his nomination of Comey to be FBI director in the Rose Garden on June 21, 2013. Win McNamee, Getty Images
Fullscreen

Comey testifies during a hearing before the House Judiciary Subcommittee on Commercial and Administrative Law on May 3, 2007, on Capitol Hill. Alex Wong, Getty Images
Fullscreen

Comey, then the U.S. attorney for the Southern District of New York, fields questions from the media on July 31, 2002. Louis Lanzano, AP
Fullscreen