Raiders TE Nick O’Leary felt pain in his chest and was diagnosed with 100 percent blockage on the right side. He is expected to make full recovery.

SportsPulse: We caught up with broadcast legend Andrea Kremer to get her thoughts on what NFL broadcasts could look like in the fall without fans. USA TODAY

Las Vegas Raiders tight end Nick O’Leary had surgery to clear 100 percent blockage to the heart last month but is expected to make a full recovery and hopes to resume his football career next season.

O’Leary, the former Florida State star, had an angioplasty on May 19 to reduce a 100 percent blockage of an artery. Doctors said there is no damage to his heart, and he should be able to return to football next year.

“I feel good,” O’Leary, 27, said Monday. “I feel better than I did before. I’ve got to be on blood thinners for six months to a year. That’s really the only reason now why I can’t play football. If I (got cut), they said that would be the biggest problem, wouldn’t be able to stop the bleeding.”

O’Leary was placed on the reserve/non-football injury list by the Raiders on Monday. Reports surfaced erroneously that he had retired. He said the Raiders told him “they’re going to leave the door open for next season.” 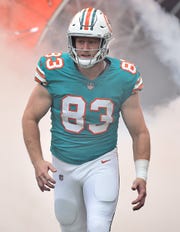 O’Leary has played five seasons in the NFL and signed with the Raiders in March. He spent 13 months with the Dolphins.

The grandson of golfing legend Jack Nicklaus, O’Leary said he felt pain in his left arm that moved to his chest while working out, and then again while playing pickleball with his brother.

“I said sarcastically to my brother there’s something wrong with my heart, I don’t know what it is,” he said. “I happened to go to the hospital, and they told me it was a heart attack.”

He spent three nights at Palm Beach Gardens Medical Center after having two stents placed into the blocked passageway. He is able to play golf, ride a bike and work out lightly and will work his way up to more strenuous exercising before he starts running routes again and preparing to play football.

“If they still give me the opportunity to play next year, I’d love to,” he said.

The 6-foot-3, 252-pound O’Leary has played for three NFL teams. He is a physical player whose professional career has been primarily as a pass-blocker.

“I got all these friends, I’m in better shape than they’re in, I’m working out, I feel like I’m in good shape,” he said. “For it to happen to me, I was in shock. I didn’t think that’s what it would be. For that to happen and me ending up being in the hospital for three days and having a heart issue is pretty weird.”

O’Leary has caught 53 passes for 668 yards and four touchdowns in his NFL career. After three years in Buffalo, he played 19 games for the Dolphins in 2018 and 2019 and finished last season with the Jaguars.

He had a decorated career at Florida State, culminated by winning the Mackey Award his senior year (2014) as the best tight end in the country. In four years at FSU, he had 114 receptions for 1,591 yards and 17 touchdowns. He helped the Seminoles win the 2013 national championship.