After numerous delays, Facebook is rolling out a payment feature in the messaging app.

Facebook's efforts to monetize WhatsApp – the messaging app it paid $19 billion for in 2014 – have been delayed and rethought several times over by CEO Mark Zuckerberg and his management team. Plans to place advertisements in WhatsApp Status were suspended earlier this year and efforts to launch a payments platform in India have hit a roadblock.

But WhatsApp payments is finally launching. Not in India, but Brazil, WhatsApp's second-largest market by users. The service is built on Facebook Pay, which the company plans to use as the foundation to support payments across all of its apps. As e-commerce becomes a bigger part of Facebook's business, WhatsApp payments represents a major step toward monetizing WhatsApp's 2 billion users.

How payments will make money in WhatsApp

Facebook will charge fees in line with industry standards for payments made in WhatsApp. That means peer-to-peer payments won't cost users anything, while businesses will pay a fee to receive payments from customers. In Brazil, that fee is 3.99%.

It's worth noting Facebook uses a similar fee structure for payments in Messenger, which it rolled out in 2015. But Messenger payments haven't become a major source of revenue, because most users don't use the app to communicate with businesses, and when they do, they're not using it to transact. 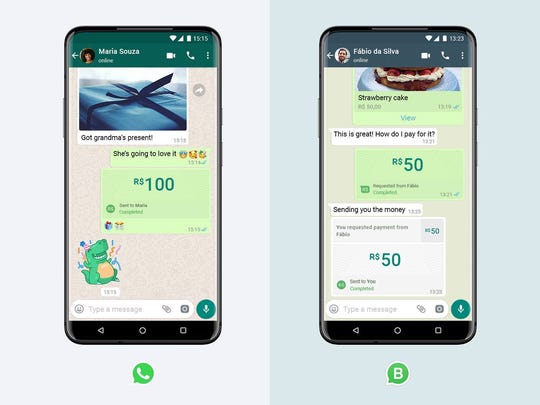 It's far more common to use WhatsApp for business interactions, especially in countries like Brazil or India. In fact, WhatsApp rolled out an app just for businesses in 2018. It amassed over 5 million users within a year. There's still a lot of room to grow that number, as Facebook boasts 140 million Pages on its flagship platform. What's more, its investment in and partnership with Reliance Jio could bring millions of businesses onto the platform.

At the end of last year, WhatsApp introduced the ability to add a product catalog in the business app. And it offers a paid API for businesses to more easily handle communication with customers. The addition of a payments platform within the app will support both.

Payments in WhatsApp cannot be considered in a vacuum. Supporting commerce in the messaging app will make click-to-message advertisements on Facebook or Instagram more valuable. That's because they increase the ability to convert a message into a sale, and Facebook could have additional user data about their payments behavior in its messaging app.

Moreover, Facebook is using the Facebook Pay platform it started rolling out last year in order to support payments in WhatsApp. The unified platform allows users to enter their payment information once, and use it across Facebook's family of apps.

Facebook has made several efforts to increase commerce on Facebook and Instagram over the past year. It introduced Checkout on Instagram and Shops on Facebook. Both aim to reduce the friction customers experience when clicking through advertisements on its platforms, as well as make it easier for retailers to establish an online presence. Adding payments in WhatsApp could help increase conversions for its other e-commerce products and vice versa.

WhatsApp payments in Brazil is just the first step for Facebook, but it's extremely meaningful. The country represents a sizable portion of its market, and a fast-growing economy. Increasing the number of users with payment information connected to Facebook Pay should support much broader applications than just sending some cash to a friend, and that's where the real opportunity lies for Facebook to finally make some money from WhatsApp.

The Motley Fool is a USA TODAY content partner offering financial news, analysis and commentary designed to help people take control of their financial lives. Its content is produced independently of USA TODAY.

When investing geniuses David and Tom Gardner have a stock tip, it can pay to listen. After all, the newsletter they have run for over a decade, Motley Fool Stock Advisor, has tripled the market.*

David and Tom just revealed what they believe are the ten best stocks for investors to buy right now... and Facebook wasn't one of them! That's right -- they think these 10 stocks are even better buys.